Collective nouns are weird and wonderful ways of describing a group of things of the same kind.

In many cases, the group name for a type of animal seems to describe the animal's movement, demeanor, or associations.

What is a group of chickens called and why?! 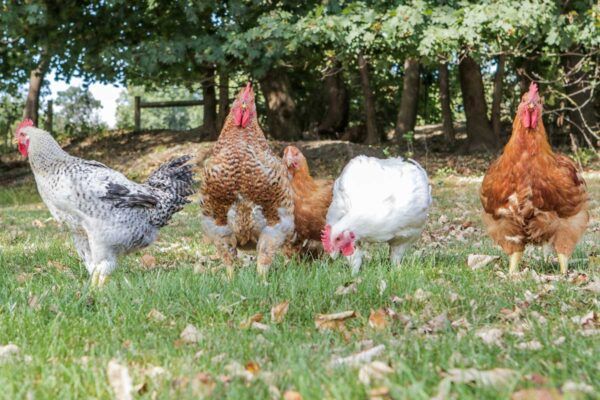 Consider, a crash of rhinos where the collective noun is an onomatopoeia that resembles the noise these heavy beasts make as they move.

A pride of lions highlights the stately, regal manner, and associations of these feline kings.

A murder of crows is perhaps one of the best known odd collective nouns and was probably given to the birds because of their habit of eating carrion and their long association with death.

The bird world has a great number of odd collective nouns, a group of owls is aptly called a peck, though you can also call them a parliament or a study which better reflect the wise nature of these nocturnal birds.

A gathering of emus is called a mob, which makes a lot of sense when you consider their habit of kicking animals to death when threatened!

The ever regal eagle gathers in formal convocations, congregations, or aeries some times spelled eyrie. The word aerie is from a Latin word meaning flat ground which describes the flat area on mountains on which eagles build their nests.

So what about our feathery, egg-laying, poultry friends, the chicken? Do you have a cluck of chickens in the garden perhaps? Or maybe a feathering of hens in the coop.

A flock seems to describe the social structure of a group of chickens. This is especially apparent when you introduce new chickens to each other. You will see that they begin to flock together and establish a pecking order.

What is a group of chickens called if you want to be a bit more exciting?

If you want to be a bit more exciting, you can refer to a group of chickens as a peep. Perhaps chosen for the way they seem to peep around the corners of the coop when you are trying to herd them inside, or maybe it was chosen for its resemblance to the noise made by chicks. We think it's probably the latter as the word peep is often used to refer to a group of chicks.

When you have a group of hens, particularly hens of laying age, you can refer to them as a brood. This one makes a lot of sense as it refers to the broody nature of laying hens and identifies them as females ready to lay. Sometimes, chicks are referred to as a brood as they are a result of the hen's broodiness. The word brood comes from the same root as 'breed' and is a term that is linked to reproduction or the longing to reproduce.

Broody became a term used to refer to women who wanted to have children because they were compared to the hen who gathered her chicks around her for safety. It is also a word used to describe a person who dwells on something because it conjured images of a hen sitting on her eggs, the way you might sit, or brood, on a thought.

What is a group of chickens called before they even hatch?

Before they hatch, chicks, or rather eggs, are called a clutch. The word 'clutch' comes from the old Norse word klekja and the middle English word cleck which meant 'to hatch.'

The average chicken will have a gather about a dozen eggs in a nest before sitting on them to help them hatch. As such, the average size of a clutch of chicken eggs is 12.

When you reach in and remove eggs from a nest, it is called dipping the clutch, and purposely removing eggs or a whole clutch of eggs to encourage animals to relay eggs is called double-clutching.

Capons, a term used for castrated male chickens, gather in a mews. This is an interesting term, that originally meant a type of stable with rooms above but came to mean a row of houses that had been converted from the aforementioned stables. Perhaps mews is used to refer to capons as they too have been 'converted.'

What is a group of chickens called again?!

Our favorite term for a group of chickens is less common, though we think it should be the primary collective noun! If you're feeling a bit whimsical, you can call your group a chattering of chickens. This is such a great term that reflects the way your birds sound as they meander around the yard!

Don't fret over whether or not you've got your broods and your mews the right way round, or whether your chicks are too old to be called a peep. At the end of the day, the chickens won't know the difference!