While the perennial debate concerning the origin of Gallus gallus domesticus (or as they're more commonly known chickens) has raged unchecked amongst bar-stool scholars and coffee house philosophers for decades, it was only fully explored and quantified with a possible solution when Neil Degrasse Tyson examined it in detail. Did he know where chickens came from, do we know what they are? Are chickens mammals or reptiles? 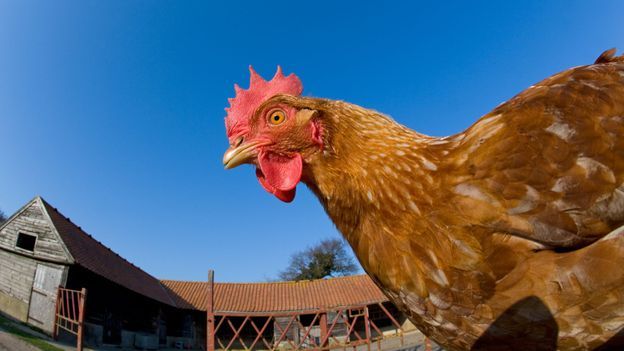 His theory that the egg appeared first but it was laid by another bird didn't really shed as much light on the debate as we'd hoped it would and it carefully circumvented the need to provide an actual answer. The lack of a definitive conclusion means that, realistically, we're still no wiser about which came first, the chicken or the egg.

Which in turn leads inextricably to the next question - where did chickens come from?

A popular theory among evolutionary biologists and paleontologists is that, unbeknownst to us, dinosaurs still roam the Earth. Or more accurately, their ancestors do.

The idea that birds are the direct descendants of dinosaurs initially began to gain momentum when Thomas Henry Huxley, often referred to as "Darwin's Bulldog" due to his strict adherence to and defense of the Theory of Evolution, discovered a fossilized feather and suggested that there might be a direct genetic link between birds and dinosaurs, albeit one separated by millions of years of development.

It was a theory that was seized upon at the time and despite being more than one hundred and fifty years old, is still the cause of fervent discussion and discourse in the scientific community.

Still lacking the rosetta stone that would either prove or disprove Huxley's hypothesis, the idea slowly crept into and became part of, the mainstream consciousness, which in turn gave rise to the idea that birds were more closely related to lizards than they are to mammals.

Which, no doubt, originally led to the question in hand, namely "Are chickens mammals or reptiles?"

So, what are they? Are Chickens Mammals or Reptiles?

Cutting right to the chase, the truth is chickens are neither mammals nor reptiles. They belong to the genus known as fowl, which is a part of the biological class called Aves, or birds.

A group of warm-blooded vertebrates that are characterized by feathers, toothless beaked jaws, a high metabolic rate, a four-chambered heart, and a strong, lightweight skeleton.

The sub-genus (or species) of birds that chickens belong to, fowl has its own set of distinctive characteristics that separate it from it's larger biological grouping. Fowl are far more prolific than the average member of the Aves family and regularly produce, or lay, batches of between five and ten eggs compared to the far more usual one or two eggs that larger birds of prey usually lay.

The young also develop much more quickly than other members of the Aves classification, are in most cases reach maturity, and the ability to reproduce, at a far earlier age.

While birds, and the Aves family as a whole, are separate from both mammals and reptiles, they share an uncommon number of characteristics with both.

So, to disprove once and for all, why chickens aren't reptiles, and most definitely aren't mammals, we're going to look at what characterizes both and highlight why chickens couldn't possibly belong to either biological classification.

What Is A Mammal?

Mammals are vertebrate animals that make up the biological class, Mammalia. They are characterized by the presence of mammary glands which the females use to nurse their offspring, the presence of a region in the brain known as the neocortex (which governs and controls all of its higher functions such as sensory perception, the use of language, and cognitive function), three separate and distinct middle ear bones and fur or hair.

All of these things need to be present for an animal to be classified as a mammal.

Let's start with the most glaringly obvious reason on the list. Chickens don't have hair or fur. They, like every other member of the bird family, are covered in feathers.

And despite urban rumor and half-whispered and less than half baked common mythology that willingly subscribes to the idea that they can't, chickens like most members of the bird family can actually fly.

For some reason, probably because they're not very good at it and haven't actually mastered it in the same manner as the rest of their genus have, they choose not to. They usually don't reach heights of more than ten feet and aren't actually able to cover much distance when in flight, but nonetheless chickens can fly.

They just choose not to.

Don't ask us why, we don't know either.

You could ask a chicken, but they won't be able to tell you why either. Because they're chickens and they can't talk.

What is a group of chickens called clucking in unison?

Which, rather conveniently leads us to the next reason why when you ask "Are chickens mammals or reptiles?" we answer - chickens aren't mammals. They, like every other member of the bird family, don't have a neocortex, the part of the brain that governs, and controls, language. Even if they wanted to tell you why they choose not to fly, they wouldn't be able to.

Then there's the whole issue of nursing their young. Chicks, almost as soon as they're hatched, know how to feed themselves, it's a biological imperative that drives their survival instinct. While they look after and help their young to fend for themselves, chickens don't nurse their young.

What Is A Reptile?

Reptiles are air-breathing vertebrates that are usually covered in scales, bone-like plates or a combination of both.

They lay soft eggs from which their young hatch and because of their incredibly slow metabolisms, they are cold-blooded and tend to hibernate during Winter and colder seasons.

Have you ever seen a scaly chicken? No, we haven't either. As we've already mentioned, chickens are covered in feathers, and while they're not the world's most gifted aeronauts, it's their feathers that help them to fly, and ultimately what makes them birds.

They don't have scales, and they're not enveloped in bone-like plates. Which means that they're not reptiles.

Lastly, it's one of the characteristics that they share with mammals that throws up a biological wall between chickens and reptiles.

Chickens are warm-blooded animals that are driven by the same incredibly high metabolism that the rest of the bird family are. They're not cold-blooded, and while they undoubtedly like to sleep and spend an inordinate amount of time doing so, they don't hibernate either.

Chickens aren't cold-blooded and they don't hibernate, which means that they're not reptiles.

Now that we've proved that chickens aren't reptiles and they're not mammals, we need to answer one final question. What are chickens if they're not reptiles or mammals?

While they share an uncommon number of characteristics with both mammals and reptiles, all of which are evolutionary biological tools that developed to help their species survive and flourish, the most common attributes that chickens possess place them firmly in the biological classification known as Aves. Or as we like to call them, birds.

They have beaks that they use to forage, and dig, for food, and while they're not as sharp as those of some of their avian cousins, chickens also use their beaks (as well as their clawed feet) as a weapon to defend themselves and their young.

While we're on the subject of their young, it's probably worth mentioning that chickens, just like every other member of the bird family, lay hard eggs from which their young are hatched.

And even though they tend to be a little more prolific when laying (which makes them part of the Fowl family, a sub-genus of their particular biological classification) eggs, they are nonetheless, birds.

Lastly, there's the inescapable truth that definitively proves that chickens are birds, They're covered in feathers, and while they don't like to, for reasons that are best known to themselves, chickens can, and often do, fly. They might not be the greatest of aviators, but they can still take to the sky whenever the mood takes them.

Feathers and flight, are the icing on the avian cake. Chickens, whether they like it or not, are neither reptiles nor mammals. They're birds.