Everyone's seen a Jurassic Park movie in their life, right?

Wait, what has this to do with chicken feet? More than you might think, we promise.

The feet of herbivores generally evolved for weight-bearing and motion first and foremost, and while this is by no means uniquely true, they generally evolved towards nails or hooves because the herbivores didn't need a set of sharp killing-knives on the end of their feet.

Not being necessary to get them the nutrients they needed to survive and reproduce, most herbivores left the killer claws behind.

Plenty of them developed claws for other purposes, tree-climbing and other dextrous escape methods being huge among them. But deadly claws, or talons? Not so much.

So what's the point? 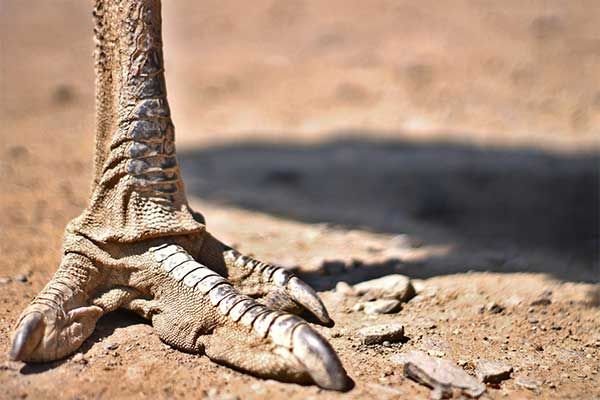 The point is that "talon" as a description, is equivalent to "neurosurgeon".

Just as lots of people can be doctors -- whether or not they practice medicine -- only a neurosurgeon is allowed to open up your skull and poke you in the brain.

So with talons -- only one class of animal in the world has talons, and there's a logic to that. Only birds of prey have talons. Birds that regularly, as a matter of course, use their talons not only to catch their food, but to kill it too.

The bald eagle? Big set of talons, with which it tears apart fish and squeaky furry things so it can get its protein-fix.

Chickens? Well, although they can give you quite the flesh wound if you venture too close, what chickens have are definitively claws -- extended sharp nails on the end of their feet, which they use for scratching at the ground to find their food, usually in the form of grain.

Wait, so what was the dinosaur thing again?

Just a demonstration that the less an animal has historically needed sharp claws or talons, the less likely they are to have them today.

With chickens, there's an element of unnatural selection at work too -- the human race decided the chicken was one of the dinosaurs' tastiest descendants, and they also gave regular, protein-rich eggs.

Chickens have claws. They haven't needed talons in a very long time.

The Eagle Has (Barely) Landed

If you look at talons in detail, the distinction between talons and claws becomes easier to understand.

Take the bald eagle. Look at its feet. The talons on the eagle are curved, hooked, like something between a fishing hook and a scimitar. And that's very much the point.

Birds of prey hunt most often from high altitude. They need to be able to pierce the flesh of their prey animals and fish, and then not lose their grip on them as they immediately fly away again.

If they had straightforward claws, there would be every chance that either those claws wouldn't go into the prey animal's body immediately, or if they did, that they'd slip out again as soon as the birds took off.

Those are the defining characteristics of anything that deserves to be called a talon. They're used to catch and kill prey animals, and they have a more pronounced curve to them, to pierce, grip, and keep hold of those prey animals.

That's why animals like lions and tigers and bears (oh my!) don't have talons either. Only birds of prey hunt the way they do, making rapid, aerial attacks and having to carry away the prey in an instant.

That's why they've developed the talons they have, a whole different class of tool to a nail or a claw.

Land-based predators still have use for sharp claws, to slash open the flesh of their prey and get to the protein-rich steamy parts inside.

But they're not required to leap up into the sky and take their prey away with them, so they haven't needed to develop the signature curve and hook of talons.

Not for nothing, when Mankind started fishing, he first used rapid-fire weapons that did half the job of the talons on a bird of prey -- piercing the flesh rapidly.

When we began to fish at some distance from the prey, say standing on the river bank with a rod, we developed a system that more exactly mimicked the birds of prey's technique.

While be baited our line with a tasty morsel for the fish, underneath the treat, as soon as we could, we hid a hook, a highly curved man-made talon, so that we could pierce the flesh, and whip the prey fish through the air to the safety of our basket without them wriggling free again.

Chickens rarely need to catch fish. Or rodents, for that matter. They do not need to spear their food or carry it away with them.

Chickens need to find their food, the grain that keeps them healthy.

For that, they use their claws to dig in the ground, to disturb a surface layer, and uncover things that might be hidden. That means their claws have never needed the curvature that would warrant the name of talons.

They've needed to be quite sharp enough that any human getting in the way could get a nasty flesh wound though.

From their days in the wild, where they would scrabble in multi-layered terrain for the food they needed, through their domestication in farmyards, where spare or forgotten morsels might be hidden in the dust, under straw, or behind some other more prominent feature, scratching has been the chicken's way to pick up extra, to find the advantage that will make them stronger, more certain of survival compared to their brood mates.

For chickens, scratching might well have started as -- and continues to be -- a way of getting extra food, but it's actually more than that.

Chickens scratch the ground instinctively. Even as chicks, before they've learned what food is all about, they do it. Why is scratching such a primal part of the essential chicken?

While we can't know for certain, because interviewing chickens is surprisingly less enthralling than you might imagine, we have a fairly good idea why chickens scratch the ground.

There are four main reasons why chickens scratch the ground with their claws.

The foraging thing, we knew -- the finding of lost or extra sources of energy makes scratching for food an undeniable benefit for chickens.

What about social interaction? If a human comes up to you and scratches themselves, you should probably smile politely and back away.

But among chickens, a good ground-scratch can mean everything from "Hello," to "You ain't from around here, are ya, girl?" to "How about them Yankees?"

It's a form of social interaction, and while probably not an integral part of their vocal language, it adds depth and direction to the flow of "dialogue" between birds.

First, it's important to understand that looking "like a wet hen" in an old colloquialism for the most miserable dripping wet creature imaginable.

Nowadays, people tend to say a miserable soaked-through person looks like a "drowned rat," but the "wet hen" is older and more visual. Chickens and water -- bad combination.

You build yourself a bathtub in a hole in the ground. Then you fluff your feathers like a miniature hurricane, pushing dust between them all.

Why are you doing this?

Parasites. Oh, so many parasites. Humans aren't the only ones who love chicken -- lots of parasites do too. Covering them in dust during a dust bath suffocates the little writhing nightmares.

Believe us, if you were constantly covered in parasites -- spoiler alert: you are -- or at least parasites you could feel, you'd take a dust bath too.

And that would mean you'd understand why chickens scratch the ground by instinct. 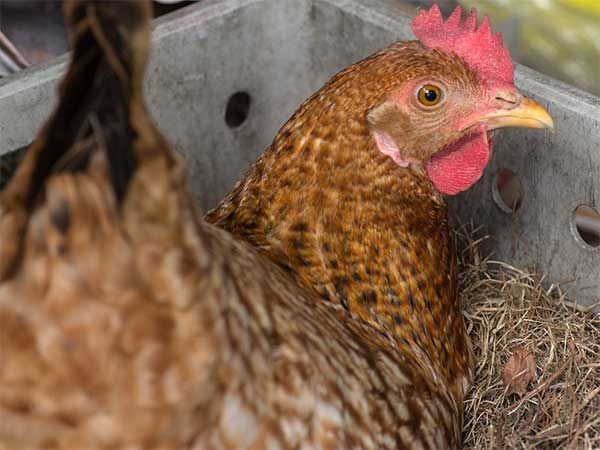 Chickens take nest-building seriously. Not without reason, when humans feel like they want a houseful of children, do we call them "broody."

That's a reference to the chicken's need to build a comfortable nest for their eggs. And every time they want to build a nest -- inside a building or outside -- they start by scratching.

Almost like a marking-out of territory, but with the practical purpose of establishing the parameters of the nest they're trying to make.

So, scratching is a fundamental part of a chicken's life on every level. Finding food, staying healthy, raising young, and bonding with other chickens. Oh, and there's one other thing.

The Talon That Wasn't

Chicken claws don't stop growing, ever. Without regular scratching, they would in fact develop the curve that might enable them to lay claim to being talons.

While they'd have the curve though, they wouldn't have the strength or function of talons, even if something small and squeaky strolled up and begged to be impaled by the furious talons of Queen Clucksalot.

Rather than hooking prey animals in fact, the chicken's overgrown and curling claws would impede the bird's ability to walk, and if still unscratched, would curl right round and impale the chicken's own feet.

Evolution is interesting. No-one ever said it was clever.

The point is this. If chickens had the hard, sharp, curved style of claws that birds of prey have -- if chickens had talons - they'd be able to do none of this, and the chicken as we know it wouldn't exist.

A bird living its life on the ground, feeding on grains rather than living flesh, doesn't need talons. And if chickens had them, almost every aspect of their lives would be impossible.

The Truth About Roosters

People often ask whether roosters have talons, separate from chickens with their claws, because roosters have a backward-facing spike.

It's used for fighting, so it has more violent intent than standard chicken-claws -- but is it a talon?

Short answer: no, it's a spur. If we remember the defining characteristics of a talon, it needs to have a hooking curve, and it needs to be used for catching and killing prey.

The rooster's spur is used to fight for mating rights and territory, not killing prey for food.

So the jury is in. Chickens have always had, have now, and will always have claws, rather than talons.

At least, they will as long as they live their lives mostly on the ground, eat grain, have parasites, and lay eggs. To do all that, they need the claws they have.

If you're waiting for the evolution of the mighty-taloned chicken of prey...you might be waiting a while.