The burning question on everyone's minds is this: "do chickens pee?"

Whether you're here because you have just acquired some backyard chickens, or whether you are here from sheer wonderment of the bodily functions of these little critters, we are here to give you the answers.

You may have noticed already if you happen to have chickens of your own, or even if you've ever been in a chicken coop, that the bedding of a chicken does not need to be changed all that often.

You may have been expecting it to be sodden with liquid, especially if you have a lot of chickens.

This may well be one of the reasons that you have come to this article because it has posed the question do chickens pee?.

The answer to this seemingly simple question actually requires a little thought.

The Bodily Functions of a Chicken - Waste Systems and More

Surely that must mean they can't pee?

We can see why you would think that, given the fact that most other animals that pee have a bladder. However, our little chicken chums are an exception. In fact, the only bird that does have a bladder is the ostrich.

As well as being in severe lack of a bladder, chickens also do not have any form of an external urethral opening. The reason for this actually lies in the adaptations of the bird.

The fact that a chicken doesn't have a bladder or urethral opening means that they are super light. This is an adaptation that has happened to birds to enable them to fly far easier.

No bladder and no urethral opening doesn't sound good in terms of being able to pee, we know. However, believe it or not, this doesn't stop them from creating the special ingredient needed for a pee.

The special ingredient, you ask? Well, mammals make a substance called urea as a result of the way we digest protein. This is a water-soluble substance that comes out by means of urination. That substance is what we know as pee.

Do chickens pee? - No but chickens do something similar. The body of a chicken also processes protein, and like us, a by-product is produced from this production. This by-product is uric acid.

Uric acid, although it may sound similar, actually does something rather different to a chicken's waste compared to what urea does in our waste.

Rather than being a water-soluble substance that can be excreted in fluid form, the uric acid of a chicken is transformed into uric acid crystals.

Uric acid crystals sound rather painful, don't they? Just imagine having to pee those out... anyway... moving on!

Before you start crying 'do chickens pee uric acid crystals?'

And weeping at the thought of our chicken chums having to painfully pee out these crystals, remember what we said earlier about chickens not having an external urethral opening. This means that they can't excrete these uric acid crystals as we would imagine.

Instead, the body of a chicken has adapted to find another form of excretion. Has anyone guessed it yet? That's right, chickens poop out their pee. 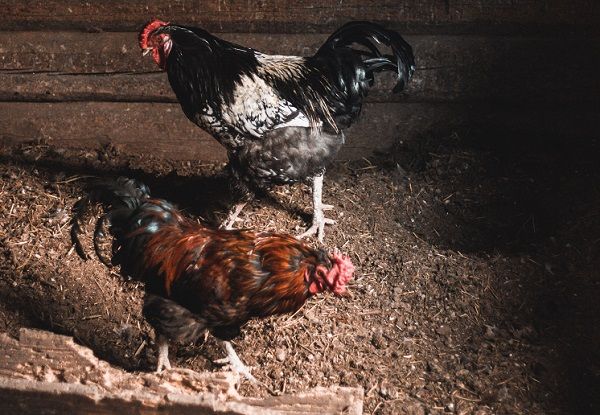 Chicken Poop? We thought this article was about chicken pee!

Have you ever seen chicken poop? If the answer is yes, we are sorry.

But also, it means you may well have noticed that chicken poop looks a little different from the poop of other mammals. Chicken poop tends to have a white layer on top of it.

You may have wondered what this means, worrying that your chickens may be sick, but worry not, for this white layer is caused by those uric acid crystals we just talked about. These uric acid crystals get mixed in with their poop in the part of a chicken's body called the cloaca.

As a side note, this is interestingly the same part of the body that a chicken's eggs come from.

Chickens' bodies are clever little things. Their poop is a mixture of these uric acids crystals, their general waste, as well as undigested foodstuffs that their bodies can't use. It all mixes together and comes out in one single motion.

Multitasking at its finest, we think!

As if this wasn't interesting enough, this pee-poop concoction can actually have very beneficial effects on your chickens and your garden.

Chicken poop surprisingly makes a fantastic fertilizer. This is due to the high amounts of nitrogen that occur in chicken excrement.

The nitrogen actually comes from those uric acid crystals we talked about. Nitrogen is something that occurs in the urine of all mammals, and whilst asking 'how do chickens pee?' and discovering the way chickens pee is different from most, they still have this.

For your garden to fully reap the benefits of this chicken manure, it has to be composted first. After this has been done, you will have one of the most desired manures around, especially for those who want a thriving vegetable patch.

The benefits of chicken poop as your fertilizer is that it is packed full of nitrogen, potassium, and even phosphorus. Even more so than the manure of a horse or cow, believe it or not!

The process does, however, require a lot of patience because the amount of time taken for the compost to be good to go can be upwards of 6 ton 9 months!

We promise you though, that it is more than worth the wait!

You said chicken poop could even benefit our chickens. How?

As well as making an excellent fertilizer for your garden, chickens can also reap the benefits of their poop. Brace yourselves for this one folks' ... chickens eat their poop!

To you and me, this must sound like the most disgusting thing on earth. However, for our poultry pals, poop, believe it or not, presents them with many benefits.

Just as chicken poop used as fertilizer can provide your garden with some much-needed nutrition, it does just the same thing for chickens.

The act of eating poop is so common in the animal kingdom that it even has its own scientific name. The process is known as coprophagia and occurs for a number of reasons. As we said earlier on in the article, chickens' bodies are super smart.

In fact, they are so smart that they know exactly what nutrients their bodies need.

Chickens instinctively know that their poop contains previously undigested nutrients, and since those nutrients have now already gone through their systems once, the second time around will make them far easier to be absorbed and used.

What Does It Mean For People Who Keep Chickens?

Where do chickens pee / poop?

Whether you have a fully formed farm, with chickens being just one of many animals, or whether it is your first time keeping some chickens in your backyard, the fact that chickens don't produce liquid urine like other animals is a positive thing.

As we mentioned at the beginning of the article, you may well have been wondering why the bedding in your chicken coops was dry, rather than being wet with pee like you thought it would be.

Hopefully, now that we have reassured you now that this is normal, and rather than peeing out a fluid, a chicken's urinary waste comes out in their poop, you will be able to see that the lack of urine is a good thing.

If a chicken did urinate in this way, imagine how stinky the bedding would be and how often it would have to be changed?! It doesn't bear thinking about, does it?

In contrast, what we have instead is chicken poop that dries out quickly and easily, and even gets eaten straight back up by the chickens themselves, resulting in some of the cleanest animals you may have ever encountered. (Take this lightly, as, in fact, all animals do pose some risk in terms of cleanliness!)

For you, this means that you may well find that less of your time is taken up by cleaning and changing the chicken coop. It should have less of an odor than the living areas of some animals, provided the chicken poop is dry. 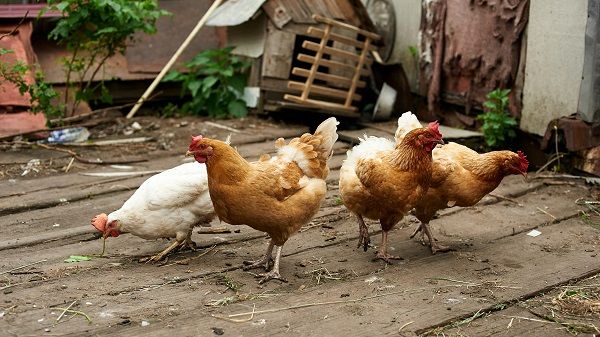 So, to finally address the burning question on all of your minds: do chickens pee? The answer is: YES!

However, the way they pee is vastly different from what we may have imagined or indeed, be used to. Chickens pee gets mixed neatly up with their poop so that they can get rid of it all from their bodies at the same time.

This results in a white layer forming on their poop, that is made up of uric acid crystals. Uric acid crystals, if you remember, are the by-product of protein processing in a chicken, and end up as a solid substance to be mixed in with chicken waste and undigested food.

Due to having no bladder or external urethral body parts, a chicken has no choice but to emit all of its waste - poop, pee, and even eggs - from the same place. This place is the aptly named cloaca (get it, because chickens cluck?!) which serves as the rectum, urethra, and vagina.

Remember, too, that chicken pee also serves a number of purposes. When it is concocted into its pee-poop form and excreted from the chicken, it can be turned into a super organic fertilizer that will work wonders for your garden, as well as serving as a health food for the chickens themselves.

The substance will provide both your gare=den and the chickens with all the nutrients they need. Chickens truly are the multitaskers of the mammal world!

We hope this article has answered all your chicken-pee related questions, and that you can go and share your new-found chicken pee knowledge with all of your fowl-fanatic friends!