There are hundreds of chicken breeds that can be found happily clucking and pecking their way around yards all over the world. From the familiar Bantam to the rarer Speckled Sussex Hen, each one is absolutely beautiful and brings a particularly charming character with them.

But did you know that, despite the variety of breeds available, there are very few chickens that have feathered legs? In fact, there are only 8 feather-legged chicken breeds recognized by the American Poultry Association, which adds to their rarity.

Also known as 'chickens with boots', we'll take a look at each of these 8 stunning breeds below. We've also put together some information about each one to give you a better understanding of their origin, their care needs, and their identifying features. 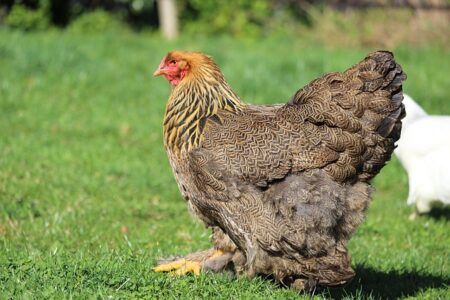 Potentially the most famous of the feather-legged breeds, Brahmas were once widely farmed in the United States for both meat and eggs. It fell out of favor with many farmers are more productive breeds became easily available, and nowadays the Brahma chicken is more commonly kept as a pet or solely for providing eggs on smallholdings.

It is a relatively large chicken and ranges in color markings including white, tan, and dark. Their colors are always two-tone, however, with a darker color often appearing around the neck and tail.

Brahmas are friendly in nature and make a good choice for a family home interested in raising chickens. They are also very low maintenance and don't require much care, although their large size does mean that they might eat a bit more than another breed.

They have thicker feathers too, and this generally means that they take a longer time to dry off, which is something to bear in mind as it can lead to other health issues. If you've got rain forecast, it's probably better to herd them into their shelter until it's passed.

Named after the town of Uccle in Belgium, this is a relatively small breed of chicken that comes in a wide variety of colors. These include black, golden neck, millefleur, mottled, porcelain, self-blue, and white.

Their feathered legs, intricate markings, and thick plumage make them a great show chicken. They aren't renowned for their egg-laying abilities and won't give you a large number of eggs throughout the week, but they do continue laying throughout the winter when a lot of other breeds stop.

This breed is super easy to care for, and the only extra attention they need is adequate shelter and warmth during winter. Belgian d'Uccles are another good choice for a family home or smallholding as they don't mind being held or petted, whilst their noisy chatter adds to their personalities and is guaranteed to provide much hilarity. 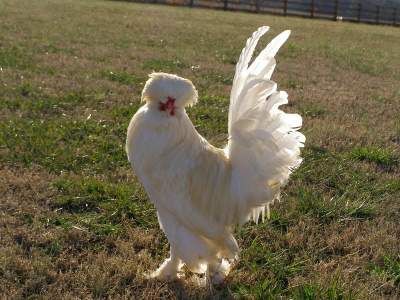 A generally calm and docile breed of chicken, Sultans are not particularly large birds and come in three color varieties; blue, black, and white, with white being the most common. They aren't the most productive variety, however, and would be better suited for showing or petting.

In fact, they typically only lay around 50 eggs per year, but their friendliness and cheeky personalities make up for the lack of production. They are also really easy to care for and don't have any special nutritional requirements, nor do they require an unreasonable amount of space, only needing 3-4ft per bird in the coop and 8-10ft per bird in the run. 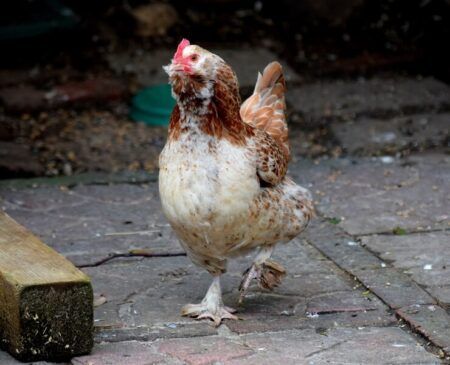 Developed in 19th century France, Faverolles can either be large or bantam and are often kept as a dual-purpose breed. They come in a variety of colors, but the original salmon color remains the most common and this interesting shade makes them a fantastic show breed as well.

They are fantastic egg-layers too and each bird can lay up to 160 eggs each per year. This makes them a great choice for farms, families, and smallholdings alike.

One of the standout features this breed of chicken is most famous for, however, is their thick, elegant beard that is usually a different color to the rest of their plumage. Faverolles are another feather-legged breed that doesn't require any special feed or diet and, much like Sultans, they don't need a huge amount of space per bird. 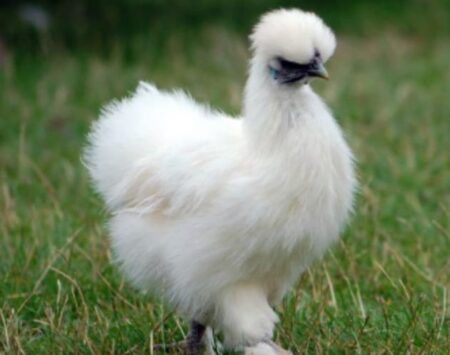 Silkies are a very old breed of feather-legged chicken and as such their origin isn't truly known, however, it is widely believed that they originated in China. Fairly standard in size, their name comes from the texture of their feathers, which is similar to silk and satin.

One of their most distinctive features is their muffed ears and beards, but there are also Silkies that don't have the beard. They come in a variety of colors including buff, white, black, and blue.

They have a friendly nature which makes them a great choice for raising around children, and they make a good choice for egg-laying too, with each bird capable of laying around 150 eggs per year. They are quite hungry birds though and may require a little more feeding than some other feather-legged breeds. 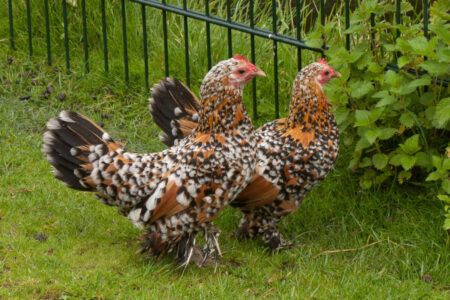 Often referred to as the 'ultimate show bird', the Booted Bantam comes in a variety of colors and has a single comb and fully feathered legs with vulture hooks. They are quite a high-maintenance bird, however, and are susceptible to climate-induced disease so they aren't the best choice of breed for inexperienced chicken owners.

They are quite good egg layers, but the eggs themselves are fairly small in size and so they aren't particularly useful for regular eating, although they can be served as a delicacy, much like quail eggs. Booted Bantams make very good brood hens though, and are a good choice if you're considering breeding feather-legged chickens.

Like most other chicken breeds, Booted Bantams are happy feeding on grain and pellets, but they are also quite keen on vegetable and fruit scraps, which makes them a great choice of breed if you're looking for a way to reduce your food waste. 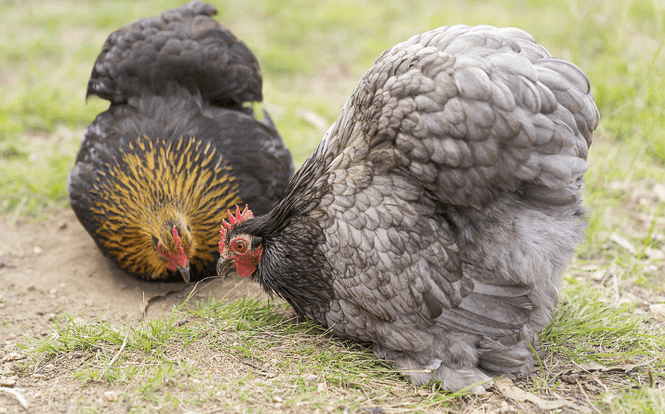 Cochins are one of the largest breeds of chicken in the world and were originally bred for meat purposes in China. They are highly ornamental and come in a variety of beautiful colors and markings including barred, birchen, black, buff, blue, red, mottled, and white.

They are also amongst the friendliest breeds of chickens you'll ever encounter and adore being petted and picked up, which makes them a good choice for a family home. They don't have an amazing level of egg-production for their size, however, each bird can still lay around 160 eggs per year.

Cochins are also pretty hardy birds and fair well in colder weather, although they will still need warmth and protection during the winter months. They don't require any kind of special diet, but it's a good idea to feed them some extra protein during a molt to help their feathers grow back healthily. 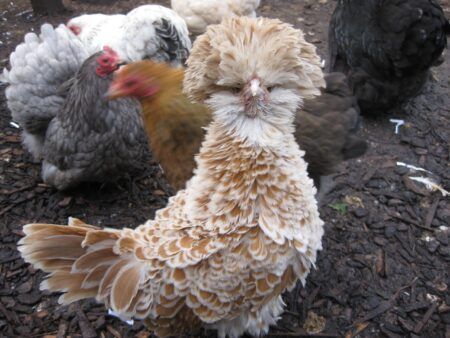 Named after it's frizzled-looking feathers, the Frizzle is a feather-legged chicken that has origins dating all the way back to the 1600s. Their unique plumage upwards and away from the body rather than laying flat against it, which makes them a really unique breed. They also come in a range of colors including black, blue, buff, white, and red.

Although not prolific layers, a Frizzle will produce around 150 eggs per year, which is more than enough for the average household. They are also good brood chickens, so make a good choice for anybody looking to breed a particularly interesting variety.

Their unique feathers aren't as insulating as some other varieties, so although they are fairly hardy they do require a little extra warmth and protection during bad weather. They also have a fairly low-maintenance diet and are happy to feed on regular chicken pellets or a mix of grain.